Narrated by Sir John A. Macdonald’s private secretary, Joseph Pope, Macdonald opens with Canada’s first prime minister fighting his last great election battle. Although the year is 1891, the issues are uncannily similar to political issues today. The prospect of free trade with the U.S. threatens an American takeover. A political scandal in Quebec could topple the government. Exhausted by another electoral victory, the indomitable old leader struggles to keep his iron grip on his party and life itself.

MacSkimming renders Macdonald in intimate detail, revealing the humanity, intelligence and immense personal magnetism that made him so great and so popular. The story features a memorable cast of characters, including Ulysses S. Grant, Louis Riel and Wilfrid Laurier. It also introduces us to Macdonald’s family – his formidable second wife Agnes, his conflicted son Hugh John, his disabled daughter Mary. As the novel moves majestically toward Sir John’s final hours, he addresses the reader directly, reflecting wryly on his triumphs and tragedies.

Convincingly grounded in the political and personal passions of the day, Macdonald delivers a brilliant portrait of a young emerging nation and its creator. Seductively evocative and emotionally powerful, this is historical fiction at its best.

“An engaging novel handled with imagination, sympathy and verve, making a hugely enjoyable read. I can’t wait for MacSkimming’s next novel, on Wilfrid Laurier” – Mary Millar, The Globe and Mail

“Roy MacSkimming not only brings Sir John A. Macdonald to life, he brings him into our hearts.” – Nino Ricci

“An extraordinary novel. A wonderful and intimate evocation of a political lion in winter.” – Aritha van Herk

“Fun to read… MacSkimming makes Sir John a man you would love to have known and hung out with.” – Bronwyn Drainie, Quill & Quire

“Gloriously realized…thanks to Roy MacSkimming’s storytelling magic, we gain a new appreciation of the great good fortune that made Canada possible.” – Roy MacGregor

Why did you choose Sir John A. Macdonald as a subject for fiction?

Roy: I wanted to rescue him from the ten-dollar bill. We Canadians carry John A. around in our pockets every day, but we seldom take a good look at him. Who was he, really? Who was this man without whom Canada wouldn’t exist? Apart from the cliche that he was a drunken rascal, we don’t know him. And yet Macdonald not only created Canada, he was a complex and fascinating human being who inspired great love and great hatred in his own time. He profoundly shaped this nation over its first quarter-century of existence. He was the father of our country, and we all need to know our father.

Did you have any more personal reasons for writing Macdonald?

Roy: Once I discovered a strong personal sense of connection with Macdonald, I wanted to share my discovery with others. I began to feel I knew him when I read Donald Creighton’s great two-volume biography, written in the 1950s. Creighton was a historian who recognized the incredible drama of Macdonald’s life and the richness of his character. Coming along half a century later, I wanted to bring Macdonald to life for our times as Creighton had, but through the medium of the novel, which taps directly into our personal imagination. Not incidentally, the Creighton volumes had belonged to my father, a Scot and a great lover of Canada. Writing Macdonald became a quest for the personal as well as the national father. When I put words into Sir John’s mouth, they came out in my father’s brogue.

The novel’s chief narrator is Joseph Pope, Macdonald’s private secretary. Why did you decide to tell the story through his eyes?

Roy: Because Pope was always there, day and night, at Sir John’s side. He saw and heard everything. He could be a reliable witness to events, both political and personal, whether inside the Cabinet room or inside Earnscliffe, Macdonald’s home. In that sense Pope is a bit like Conrad’s Marlow or Nick Carraway, narrator of The Great Gatsby. After nine years in Macdonald’s service, Pope knew him intimately, and this is above all an intimate portrait of the man, up close and personal. Pope also wrote the most important biography of Macdonald until Creighton, and he left behind his own memoirs. I had a trove of Pope materials to draw on. He was a keenly observant and insightful man, and a very good writer, considering he was a lifelong public servant. He would later establish the Department of External Affairs and have a long and distinguished career, so at the novel’s end I’m able to throw the narrative forward thirty years and provide a certain distance on what’s gone before.

Where does a female perspective come in?

Roy: We see a lot of Macdonald’s second wife, Agnes. She was a force to be reckoned with and a powerful influence on Sir John, even if he didn’t always take her advice – and it was always freely given. I’ve portrayed their abiding love for one another, which I think was one of the things that kept him going strong so late in life. We also meet their disabled daughter, Mary, who was born hydrocephalic but emerges by the end as an interesting and independent person in her own right.

Does Macdonald take any liberties with history?

Roy: It’s a novel, after all. Fiction and non-fiction take different paths to truth. Yet I’ve based Macdonald on a substructure of historical fact, and some of the dialogue is extracted from the historical record – including whole scenes set in the House of Commons. As I mention in an author’s note at the end, scholars will recognize at least three major scenes that I invented out of whole cloth. Actually there are more than three. On the other hand, I found no reason to alter the political events of February to June 1891, when the action of the novel takes place, or the physical details of John A.’s illness, death and funeral, including the Ottawa weather at the time. All these details are based on research I did at Library and Archives Canada. So there’s a lot of history in the book, but the story and the characters come first.

One of the main characters is Louis Riel. Yet in 1891 it was six years after he’d been executed.

Roy: Yes, so I had to invent devices to make Riel present. One of these is the occasional insertion of Macdonald’s own narrative voice recalling the past. I don’t think it’s a stretch to imagine Riel weighing heavily on his mind and conscience during his final days. Riel weighs on us to this day. And he’d been Macdonald’s nemesis for fifteen years. I also don’t believe it’s a stretch to give John A. a conscience. He was a man of empathy and compassion, even though he could be ruthless when he had to be politically.

Wilfrid Laurier is another main character.

Roy: He’s the perfect foil to John A. – his great political adversary, yet heir to his legacy of governing Canada successfully through a moderate coalition of English and French interests. Laurier is the subject of my next novel, Laurier in Love. 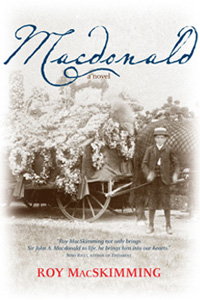